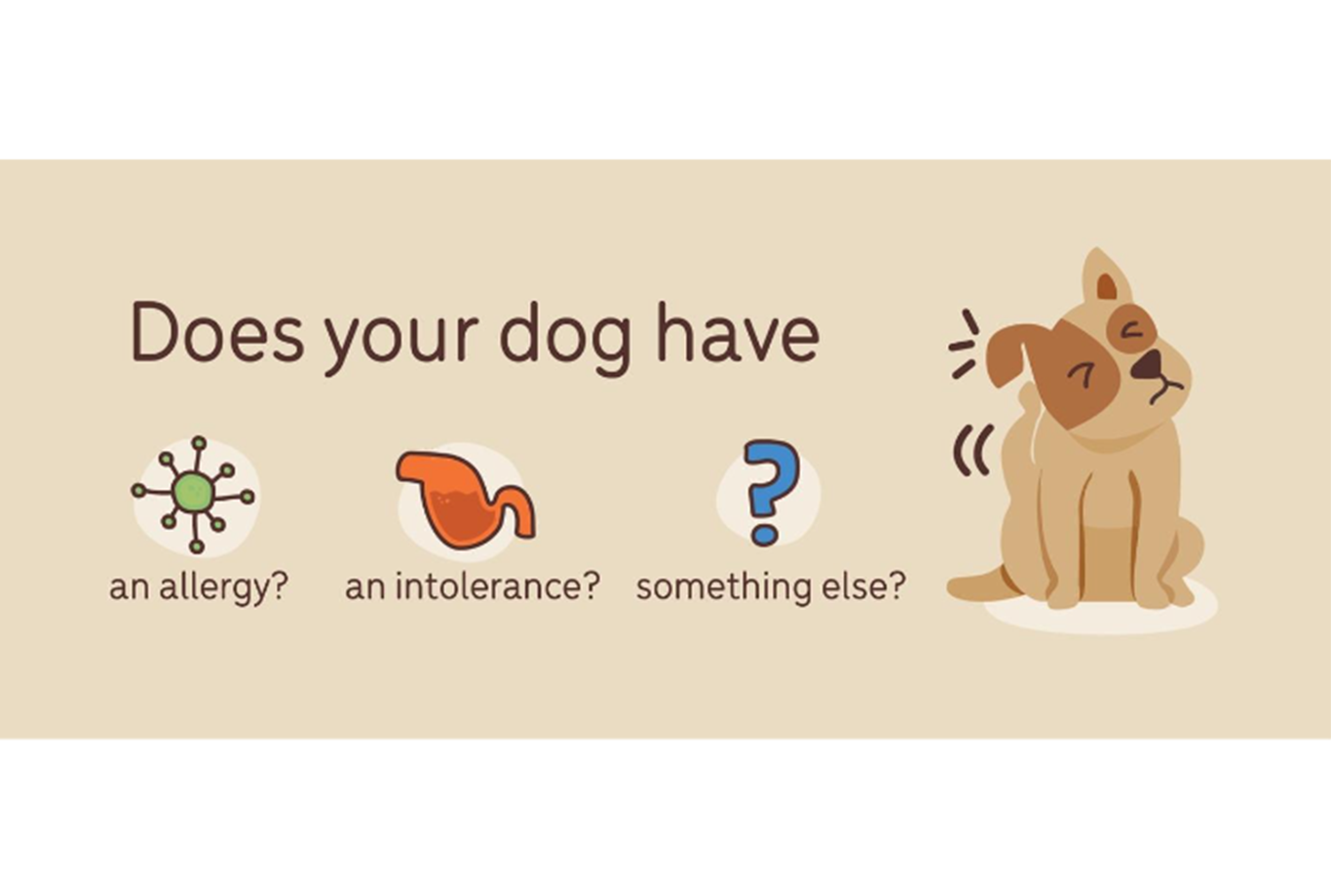 For any dog owner regularly on social media, you’ve no doubt read countless posts that start with the phrase “My dog is allergic to ‘xyz’ - what should I do?” And while responses are often numerous and varied, the recommendation to avoid certain meats, particularly chicken and beef, is generally at the top of the list. But what is this advice based on and is it even valid? Let’s start with a bit of theory!
When it comes to adverse food reactions in dogs, there are two main categories – true food allergies and food intolerances. Understanding the difference between the two can make a big difference in how you treat your dog and how they respond.

In very basic terms, a true allergy can be defined as an inappropriate or exaggerated reaction of the immune system to a common substance (called an antigen) that, in the majority of dogs, causes no symptoms. There are two different types of allergic reactions:

The antigens triggering the immune response could be compounds in the food your pet is eating or it may be a compound from the environment. Whilst anaphylaxis represents one of the most extreme examples of this type of immune response to a food, more common reactions include itchy skin, skin and ear infections, diarrhoea and even vomiting in some dogs.

By contrast, food intolerances don’t involve the immune system at all. Food intolerance is a broad term that is used to describe a wide range of adverse reactions to foods that cause symptoms after eating some foods. For example, food intolerance may be caused by digestive enzyme deficiencies, toxins, food additives, vasoactive amines (which are natural compounds in foods, such as histamine) and contaminants such as bacteria. Symptoms may include stomach pain, bloating, gas/flatulence, diarrhoea, irritable bowel syndrome (IBS), rashes, and urticaria (hives).

Because food intolerances are not caused by a dog’s immune system, symptoms can appear the very first time that your dog consumes a trigger food. A great example is lactose intolerance, which can trigger bouts of diarrhoea or an upset stomach when dairy products are consumed in amounts beyond what your dog can tolerate. However, if you are regularly, and often inadvertently, feeding your dog a diet that contains an ingredient they are intolerant to, they may experience chronic digestive and skin issues that can easily be mistaken for a true food allergy. With food allergies in humans being reported at an all-time high, many pet owners are becoming increasingly concerned about food allergies in their pets. But as it turns out, food allergies are not as common as many large commercial pet food companies try to make you to think. According to a 2018 State of Pet Health Report that analysed data from over 2.5 million dogs and 500,000 cats, food allergies affect just 0.2% of dogs and 0.1% of cats (2). So while food allergies are one possible cause for your dog’s recurrent ear infections and itchy skin, there are many more likely causes which may have nothing to do with the food they’re eating.

If not a food allergy, then what? Do I really need to avoid chicken and beef? Dogs can be allergic to pretty much any protein or carbohydrate ingredient that can be found in pet food, and while the overall percentage of dogs that have a true food allergy is low, there are some ingredients that are associated with more of the confirmed cases than others. The most reported food allergies in dogs are to chicken, beef, dairy, soy and wheat (3,4). However, there is nothing particularly special about these ingredients other than they have been the most common ingredients in pet foods for the past few decades, meaning that our dogs have had a greater exposure to them compared to other ingredients. And given that in humans, food allergy to poultry meat and red meat is rare (5), it raises the question about what else might be going on to trigger our dogs to react to these particular foods.

Factors that increase the risk of food allergy The lining of the gastrointestinal tract is the largest surface of the body exposed to the environment, and anything that compromises the integrity of the gut barrier (aka ‘leaky gut’) will allow insufficiently digested food proteins (among other things) to pass more easily into your dog’s blood stream where they trigger an immune response (the first step in developing a food allergy). Unfortunately, many common dietary and lifestyle factors that our dogs are exposed to are known to cause leaky gut, and as such, contribute to food allergies. Key examples include:

‍Many commercial pet foods contain high amounts of carbohydrates (up to 60% in some instances). Heating proteins at high temperature in the presence of carbohydrates has been shown to induce the formation of protein aggregates that are resistant to digestion and increase the allergenic potential of the food.

‍When commercial kibbles undergo the extrusion process it triggers a process called the Maillard reaction, which then leads to the formation of advanced glycation end products and other toxic compounds. This elicits a pro-inflammatory response in the body which is very damaging and increases the risk of allergic reactions occurring.

While food processing can have many beneficial effects, processing may also alter the allergenic properties of food proteins. For example, wheat and soy only induced allergic reactions after cooking, long-storage or heating.

‍Substances used in the production of food products and commercial pet food are suspected of being involved in the development of food allergies. Food additives are potential hidden allergens often overlooked by pet owners, yet dog’s consuming a typical commercial kibble or canned diet are inevitably exposed to them on a daily basis.

Mislabelling and contamination is a widespread issue in pet foods, including veterinary prescription foods used as elimination diets. One study analysing hydrolysed protein diets for dogs and cats found that 12.5% of the products tested didn’t contain the declared animal species on the label and 58% contained undeclared animal species!

‍By increasing the stomach pH, these medications have been shown to interfere substantially with the breakdown of large food proteins and increase the risk of food allergy.

‍Medications such as non-steroidal anti-inflammatory drugs (NSAIDs) are one of the most common causes of damage to the gut lining, which is known to play a role in the development of food allergies.

‍The frequent and indiscriminate use of antibiotics has been shown to facilitate the onset of allergies by destroying the diversity of the microbiome.

What are the best dog foods for allergies?

The most reliable way to diagnose a food allergy is to feed your dog something that it hasn’t eaten before and which is relatively pure, for example, just the muscle meat, organ meat and bone of a single animal species, for at least 8 weeks. This can be a homecooked diet or a commercial food, but whichever option you choose, by far the most important factor when it comes to an elimination diet is that you know exactly what's in the food that you’re feeding and that you can be confident that it's made without contamination from ingredients that aren't listed on the label. This is where commercial canned foods and kibbles generally come unstuck, because as mentioned previously, multiple published studies highlight the prevalence of contamination in these more conventional diets. According to one of the world’s foremost experts in veterinary nutrition (14), when it comes to the best dog foods for allergies, his top recommendations are (15):

Where to from here?

We know that good health starts in the gut, so a high-quality diet that’s minimally processed and free of artificial additives and synthetic ingredients is an important first step in supporting your dogs’ overall health and wellbeing and reducing the risk of an allergy developing in the first place. Incorporating pre- and probiotics into the diet has also been shown to improve the integrity of the gut lining, promote a healthier skin barrier, and maintain healthy immune system function in dogs.

We all want our pets to be happy. While environmental allergies, food intolerance and dietary indiscretion are far more common in dogs than true food allergy, if you’ve ruled out the other culprits and you still suspect that your dog has a food allergy, you should definitely speak to your vet or a qualified animal nutritionist to diagnose and manage this.

Narelle is a clinical Naturopath, Nutritionist and Herbalist for both people and pets, and operates her wellness clinic ‘Natural Health and Nutrition’ in Dural, Sydney.

Being a lifelong dog-owner and currently meeting the demands of three French Bulldogs, two German Shepherds and a Burmese cat, Narelle is as passionate about the health and wellbeing of our pets as she is about their owners. And it was this strong desire to see her own pets live their longest and best lives that led her to hours of personal research and additional study in the area of natural animal health and nutrition.